Up until May 2015 the following statement was true. I trained in fine art and I usually know how an image, or project will turn out. I may not be able to (or want to) visualise every detail in advance, but I do usually have a ballpark idea. If the aesthetics are up in the air, then I know what kind of feeling, or which ideas I want to communicate, or which kind of story I want to end up telling.

To make an image that is both familiar and foreign is a first.

In May 2015 I took this self-portrait. I suspect this is a portrait of my clown, but I’m not sure – yet. I know I am the woman in the photo; but I don’t recognise this version of myself looking back at me. It’s a strange feeling, uncanny, oddly compelling, unnerving, exciting. I’ve felt glimpses of my clown, experienced my clown from the inside, and made clown-workshop-clowns laugh with the chaos and scrapes she/I have gotten into on stage. But, until now, I haven’t seen her from the outside. 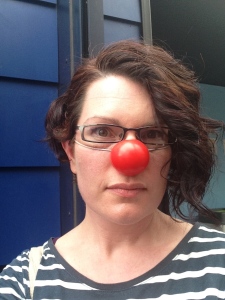 I took the photo at the end of a 2-day workshop with Holly Stoppit on The Vulnerable Clown. Two days of being as vulnerable as possible with 8 strangers, and on stage. The two days were amazing, terrifying, intense, exhilarating, terrifying. In that order, and on a repeat cycle – and yes, I’d sign up again in a heartbeat. Just before the photo, I had been improvising in a duo. All we had to do was 1. Arrive on stage, 2. Say hello, 3. Say goodbye. 4. Leave the stage. The instructions seemed simple enough – but, as clowns, it all became complex and convoluted. I can’t remember quite what we did, but there was a section when we became hula hooping Greek Gods doing Mexican waves, and there was a bit when I sang (loud, flat, deep) and that took everyone, myself included by surprise. I remember very clearly how the collaboration and performance felt. I remembered to breathe, I felt grounded, present, and connected. I felt a series of thunks, as chunks of Holly’s training, and earlier exercises dropped into place. I felt moments of realisation, of understanding. I felt the sweat energy dancing and anarchy and loved every moment. The whole improvisation took about 30 minutes that felt both like 30 seconds, and 30 hours. 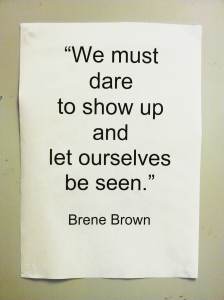 I’ve cherished this photo, and keeping it private felt important. Now it is time to bring her/me out to play… following Brené Brown’s advice…

[The clown curtain is a memorial to the curtain Red Herrings used to own. I did some amazing clown workshops with them in July and August this year. The answer to: ‘Can 6 clowns pack a car properly?’ is No.